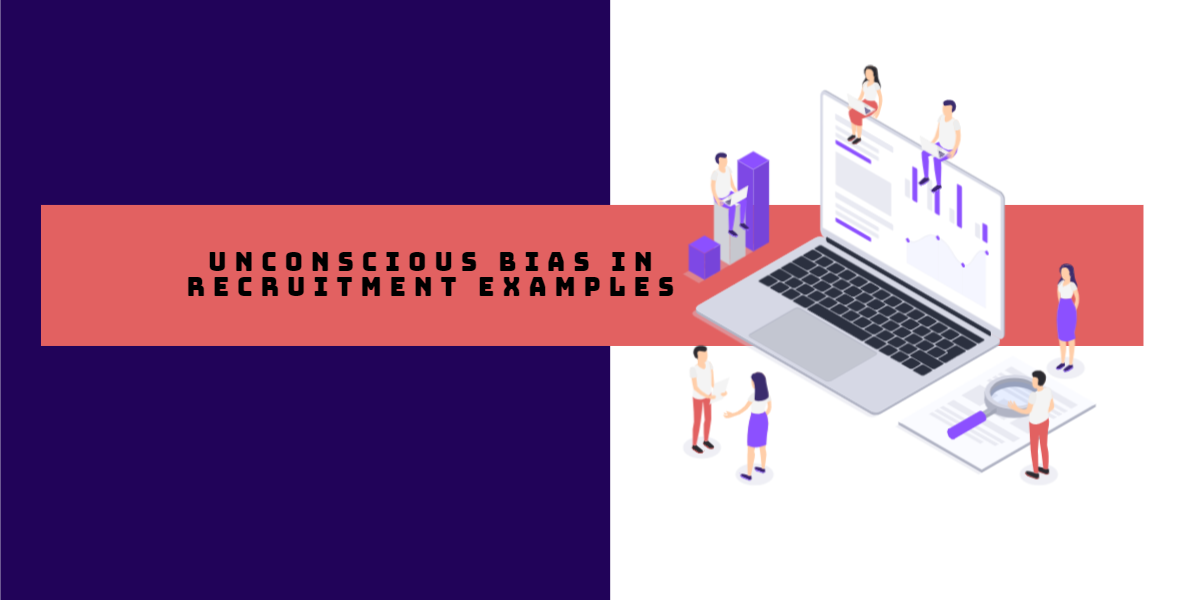 Unconscious Bias in Recruitment Examples. And How it Affects Talent Acquisition

Unconscious bias in recruitment massively affects diversity and inclusivity at work. Your feelings might unconsciously lead you to prefer one candidate out of all the others which will eventually affect the diversity of your workforce.

We all make decisions based on our gut feelings, but in recruitment and hiring, this can lead to bias or discrimination.

In this blog post, we discuss examples where unconscious bias can happen and how to make sure it doesn't happen again in future.

What exactly is unconscious bias?

Unconscious bias is defined as bias that occurs outside of conscious awareness. It can be seen in many different aspects of life and has a significant impact on talent acquisition.

The most common type of unconscious bias is what we call "implicit". This means that the person doesn't realise that they are being biased but it still affects their behavior. Implicit biases are based on stereotypes.

For example, a person might think that all women are more emotional than men and this would affect how they treat them when they come into the workplace.

In many cases, unconscious bias can have a negative effect on the recruitment process and hiring decisions.

For example, if someone has an unconscious bias against people with disabilities then they might not notice or realise when they are overlooking qualified candidates who happen to have a disability.

Unconscious Bias in Recruitment Processes and How to Combat Them

The first step in combating any type of bias is awareness. Organisations should be aware of their own biases and take steps to prevent these from influencing their hiring decisions.

The first step to combating unconscious bias is to recognise that it exists. This can be achieved by conducting an audit of your recruitment process, and identifying where you might have been biased.

This is a very common problem in the workplace, as recruiters are typically looking for people who are similar to them. They will look for candidates that have similar backgrounds, interests, and experiences. The problem with this is that they may overlook qualified candidates who don't happen to match the same criteria.

One way to counteract this is by making sure that your recruitment process isn't just based on what a candidate looks like on paper. You should also consider their skill set and personality when you're making a decision about hiring someone new.

Biases can come in different forms. We all have these unconscious biases, and they're not always bad. For example, our unconscious bias might lead us to believe someone is more qualified for a job than they really are because they look like someone we know and trust.

The problem with unconscious bias is when it leads us to discriminate without realising it. -For example, by assuming people who are different from us can't do certain things as well as we can.

Unconscious bias is a natural human tendency to make decisions based on our past experiences, without realising that we are actually prejudiced. This leads to discrimination and unfair treatment of people who are different from us.

This bias can be addressed by educating recruiters about the existence of unconscious bias and how it affects their decisions. They need to know how it works so they can recognise when they might be affected by it.

Recruiters should also be taught how to counter their unconscious biases by using an alternative decision-making process or by working with a team that includes people who are different from them.

Examples of unconscious bias in recruitment

The most common example of unconscious bias is the halo effect. This happens when people have a positive or negative opinion about one trait which influences their opinion of other traits.

Examples of how to recognise if you are unconsciously biased

In this section we uncover how you can recognise if you could be unconsciously biased in your recruitment practices. Let’s take a look:

If you’ve been using the same recruitment strategy for 5 years or more then this could lead to biases. This is because your recruitment process is turning over year avatar year with no review. This leads to inconsistencies and failures not being recognised.

Focus on these areas:

When you review and update your job adverts you will notice the unconscious bias that can be in your wording. Make sure that your job descriptions have an equal number of male and female words, so there is no bias when it comes to gender. You can successfully use gender decoders to help write better job descriptions that won’t deter any candidates with gender-based language.

Implement screening tools that review candidates based on criteria, rather than manually. As this will eliminate any unconscious bias with resume information.

Use structured interviewing techniques. A great tool is one-way video interviewing. Every candidate is asked the same questions, in the same order for the recruiters to review. There is no opportunity for recruiters to ask leading questions or help candidates answer their questions which can happen in face-to-face interviews. Often when recruiters gain a good rapport with a candidate (which could be based on a similar hobby unrelated to the role) they will ask more favourable questions and be more forgiving on answers.

2.  Using your own cut-off on high-volume applications

When candidate pools can get too large, recruiters who are filtering manually will cut off the list at their chosen point. This is usually after they think they’ve found the ‘perfect candidate’. But this is cutting off the potential of finding other highly talented candidates. This leads to the recruitment process being biased toward those who applied first.

This is where the benefits of screening tools come in. The tool will filter out any candidates who aren’t meeting essential qualifications, skills and experience. This ensures the very best talent for the role are making it passed the screening round, regardless of race, gender, age, disabilities etc.

Many recruiters have an unconscious bias toward names. Either positive or negative. But too many times, a candidate has been discriminated against due to their name. That’s why screening tools based on criteria are a great tool for avoiding this problem.

There are many ways to increase diversity in recruitment processes by mitigating unconscious bias. One of the most effective ways is to use a resume scanner that scans for keywords and highlights them for recruiters. This will help them identify the best candidates for a given position.

5.    Use a diverse recruitment team

Make sure that your interview process includes both men and women, as well as people from different ethnic backgrounds and age groups. This will help reduce the unconscious bias between recruiters from the same groups.

Biases can also be found in various areas such as:

These are just some examples of unconscious behaviour that can occur during recruitment processes.

Conclusion: What Can HR Professionals Do to Prevent or Minimize the Effects of Unconscious Biases?

Unconscious bias is defined as the attitudes or stereotypes that affect our understanding, actions and decisions in an unconscious manner. It is a type of social bias that occurs outside of one’s conscious awareness.

In conclusion, HR professionals should be aware of the existence of unconscious biases and try to minimise or prevent their effects.

By being more mindful about the way they communicate with employees and using bias-free language.

By introducing tools and technology to mitigate unconscious bias, and focus on the candidate's abilities rather than other characteristics.

This ensures the very best candidates for the role gets the job based on essential hiring criteria.

If you found this post helpful, read another blog post for more information on diversity and inclusion in the workplace.