How to identify fake resumes 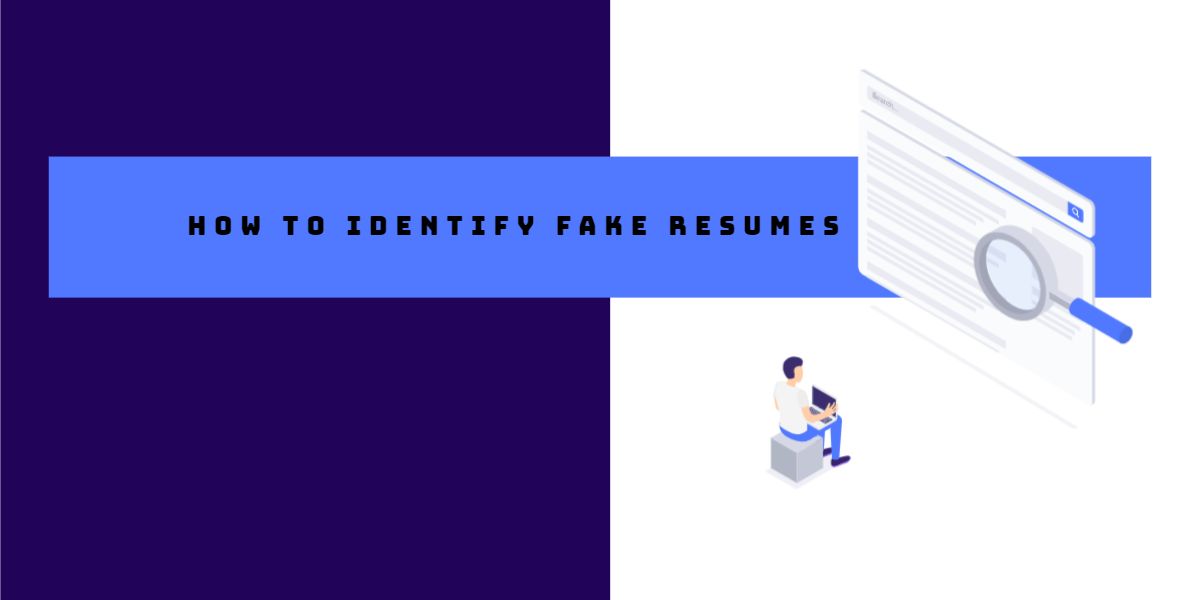 There is a rise in the number of people intentionally lying on a resume, so figuring out how to identify fake resumes can be tricky.

Shockingly, more than 78% of job applicants have admitted to lying on a resume or job interview.

Fake resumes are not a new phenomenon. They have always existed in the job market. But with the rise of digitalisation and globalisation, they have become more and more prevalent. It can even be more difficult to identify a fake resume with computer editing or fake social media profiles.

It's a common misconception that resumes can't be faked. In fact, they often are and it's becoming increasingly difficult to tell the difference. Despite the current limitations in artificial intelligence technology, there are a few ways that you can spot fake resumes online.

Throughout this blog post, we’ll guide you on how to spot a fake resume, and avoid hiring bad candidates.

Introduction: What is a Resume and Why is it an Important Document?

A resume otherwise known as a curriculum vitae (CV) is a document that summarises a person's education, skills, experience, and achievements. It is used to apply for jobs or other opportunities.

It’s an important document because it summarises whether a candidate is a good fit for the role. Based on the credentials of the resume, a recruiter will forward candidates along in the recruitment process, or choose to decline them.

Successful candidates highlight their skills, education, experience and interests suited to the specific role they are applying for within their resume.

However, this is where some recruiters can get blindsided with a fake resume.

Why would someone fake a resume?

The first and obvious answer to this is to assume they do it to land the role.

They may also embellish their skills and experience to make it seems as though they can competently carry out the tasks of the role.

Some applicants say they worked with an employer much longer than the reality to omit a later employer. In a recent study, up to 45% of applicants admitted to giving a false reason to leave a job.

There are many applicants who will try to do anything to make themselves look good. They may embellish their skills, or even create fake resumes in order to secure a job. However short-sighted this is on their part, it can leave devastating costs to the business.

Failing to identify a fake resume

Failing to identify a fake resume can have big costs to a business.

The recruiter chose this fake candidate potentially over a genuine candidate who would have been a great addition to their team. Believing that their deceiving candidate had better credentials.

The authentic candidate may have secured a position with a competitor by the time you realised the wrong hire has been made.

Once the unauthentic candidate has secured their position in their new role, and passed orientation and training, it’s apparent they lack the skills and experience they boasted about throughout the recruitment process. This can be costly to the organisation as they may need to either spend more on training, bringing them up to speed on the abilities of the job.

Or if the candidate is truly lacking skills, they may fail their probation period and the hiring process will have to begin all over again. Wasting the resources and time that went into hiring the fake candidate.

How to identify fake resumes

Next, we’ll go through the different areas of a resume that may indicate fake information.

Even with the hundreds of resumes recruiters see, it can still be difficult to spot the dishonest ones.

However, just because a candidate's resume seems too good to be true doesn't always mean it is. It could just mean that the person has been out of the workforce for a while or has had a wide variety of professional experiences.

There are many reasons why people may have fake work experience. There could be a person who wants to change careers but doesn't want to admit that they don't have any experience in the field. They may also be a person who has been laid off and needs to find a job quickly. Or someone who is trying to get a higher salary by inflating their resume.

Some of the most common signs that someone has fake or incomplete work experience are:

- The candidate's employment history is not consistent with their claimed skillset

- They’re clueless about their previous employers culture, products, or services

Other information to consider:

Has the candidate been at any companies that are in direct competition with the company they are applying to? If so, it is possible that they have left because of a bad experience.

When you suspect a potential fake resume, you should check their references. If they have any, then contact them and see what they say about the applicant. If there are no references on the website, then that should be a red flag that something might not be right with this person's resume.

Another red flag is if someone has a very long list of skills but no experience in those fields.

The candidate's experience turned out to be inconsistent with the resume submitted.

The second step is to conduct background checks on all potential candidates before hiring them for your company.

In the 21st century, there is much more than just a resume check. They can include checking out their social media, criminal history and anything else that may affect their work ethic.

You must also check their LinkedIn profile. Have they been in the industry for a long time? Can you see information that doesn’t add up to their resume?

Sometimes it can be hard to determine if the resume is fake, the candidate may sound too good to be true.

If you still want to proceed with interviewing this person, then make sure that you ask questions that will help you determine if they are qualified for the job at hand or not. Make sure to ask about skills, work experience, and education - all of which should be on their resume!

The trick is to interview the candidate properly. With the skills they need and your basic knowledge, there are a lot of ways to figure out whether someone is honest on their resume. Be ready to ask open-ended questions and trust your intuition.

Gaps in their work history

The best way to tell if someone is lying on their resume is to ask them questions about their work history. If they have gaps in their employment, they may have been fired or laid off and are trying to hide that information.

How can an ATS help with identifying a fake resume?

The first step to avoiding fake resumes is to make sure you are using an applicant tracking system that can detect them. It will be able to do this by analysing what's in the resume, such as keywords and phrases that just don't add up with the rest of the content or with other information found on social

Conclusion - How to identify fake resumes

A fake online resume is one of the worst things you can come across. You are left wondering if the person is even qualified for the position they are applying for.

Employers are scrambling to find qualified candidates for jobs and scammers are taking advantage of this. The world of LinkedIn is not transparent as it may seem. Many users create fake profiles with fantastic resumes to get an interview.

There are some red flags you should be aware of when it comes to fake resumes.

If you enjoyed this post on how to identify fake resumes, then you may love to read, “15 brain teaser interview questions and answers”.

3 comments on “How to identify fake resumes”