How does race affect employment UK? 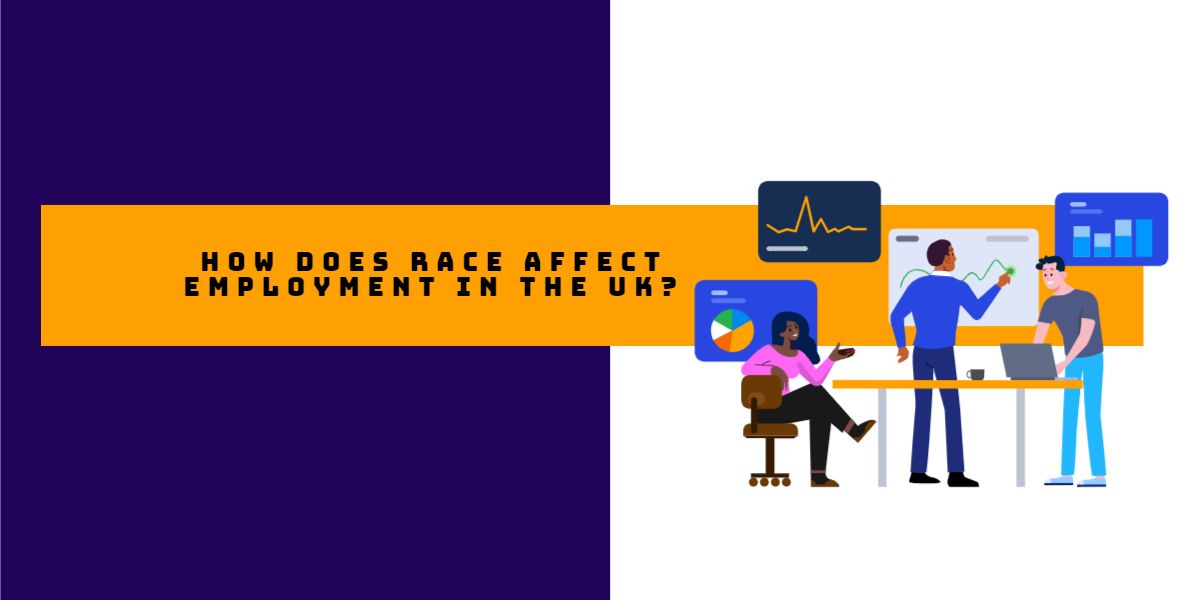 The Impact of Race on Employment in the UK

While we have made good progress as a society, inequalities remain when it comes to ethnic minority fairness and progress at work.

A field experiment from the GEMM Project found that there are still employers discriminating against applicants with an ethnic minority background.

In this blog post we look to uncover the question, how does race affect employment UK?

Let’s uncover the truth about the present-day hiring biases and what can be done about them.

Before we dive into this, let’s take a look at our troubled history but also highlight the progress that’s been made so far.

The history of race in UK employment

The history of race for ethnic minorities in UK employment has a troubled and outright cruel past.

Let’s start with 1833, when slavery was abolished.

While many people of African descent were released from their servitude, they were not free to live their lives as they wished. Instead, they were victims of racism and prejudice and denied basic rights of European citizens.

However, shockingly instead of compensating the victims forced into slavery, the payouts went to 46,000 slave-owning British citizens. All in aid to recover their financial losses!

The Payment for the Slavery Abolition Act was so large that it was only paid off in 2015 to the families of the slave owners!

In the late 19th century, racial segregation was implemented with the belief that it would create a sense of superiority for those who were white and invoke feelings of inferiority for those who weren’t. This led to an increase in discrimination against people of colour. It wasn’t until 1948 that the Nationality Act was implemented. This law would give all Commonwealth and Dominion subjects the legal right to UK citizenship. This should have been the beginning of true equality, where people could live without fear or prejudice based on their skin colour alone.

But this didn’t do much to change racist prejudice among the indigenous British population.

It wasn’t until 1951 that the Foreign Office clarified its policy on race and recruitment.

A memorandum by the First Civil Service Commissioner clarified that colour prejudice should not influence decisions. But that, “a person of manifestly un-English appearance or speech might be held unsuitable for a situation in which he would not act as a representative of the United Kingdom to foreigners’.

This meant it was a burden of ethnic minorities. - Especially those of colour, to demonstrate that they were sufficient ‘English’ enough to recruiters.

Let’s look at some examples of this prejudice existing in recruitment after this law was passed.

It was clear from the Bristol Bus Boycott that the internal bias against ethnic minorities still existed.

After the implementation of The Nationality Act 1948, there was a clear ‘unofficial colour bar’ operating among recruiters. This was proven correct by four West Indian men who formed the group, “West Indian Development Council”.

They placed tests on the bus company by setting up an interview and then informing them the candidate was West Indian. This instantly led to the cancellation of the interview.

Following this, a Bus Boycott was formed. None of the city's West Indian communities would use the bus service.

This attracted the attention of the whole nation, highlighting the obvious racial discrimination. After months of public pressure and shaming, the bus company finally backed down and got rid of its black bar.

This event led to a major development. In 1965 the Race Relations Act was passed. This codified into law that you could not discriminate on race, colour, ethnicity, or national origins.

While things were seemingly progressing, other upsetting events took place…

“If you want an N-word for a neighbour, vote Labour.”

The Civil Rights Movement in the UK made progress in 1948. This was with the passage of the Race Relations Act and has since been followed by further Acts. The 1968 Act outlawed discrimination on grounds of race, nationality, or ethnicity. Whereas the 1976 Act made it illegal for employers to discriminate against people because of their ethnic origins.

The Equality Act 2010 outlaws discrimination and harassment against employees and job applicants on the basis of disability, race, sex, sexual orientation, religion or belief and age.

By consolidating over 116 separate pieces of legislation into one Act, stands the framework to protect the rights of individuals.

The effects of racism today on employment

The impact of race on employment in the UK is a complex issue. It has been argued that there are a number of reasons for this, including "racism and discrimination, unequal access to education and training and the lack of ethnic minority role models".

There are also many ways in which employers can work to reduce the impact of racial inequality on their workplaces. These include: promoting diversity within recruitment practices, establishing an inclusive culture at work, and providing training for managers and employees on how to deal with race equality issues.

What is racism and how does it affect employment?

Racism is the belief that one’s race is superior to others. It's discrimination based on racial prejudice, which can take many forms.

Discrimination against race affects the employment of people in a number of ways. It limits their opportunities for employment by preventing them from getting jobs and promotions because they are seen as less qualified than white British applicants. The impact of racism on employment has led to racial segregation in the workforce. This is where ethnic minorities are underrepresented in higher-paying jobs such as managers and professionals. While white British are overrepresented in these positions.

How Racism in the Workplace Impacts Productivity and Prevents Diversity

In order to combat racism in the workplace, we need to look at how it impacts productivity and prevents diversity.

Racism in the workplace can have a huge impact on productivity and diversity. It can lead to low morale, high turnover rates, and absenteeism among employees of colour which can prevent true diversity from happening.

In recent years, the topic of race and how it impacts the workplace has been gaining more attention. It is time for employers to step up and take a stand against racial discrimination in the workplace. The problems of racial discrimination are so widespread that it should be impossible for employers not to be aware of its effects on employees and on their company culture.

The Equality Act 2010 makes it unlawful to discriminate against employees due to their race. As there are no violations of existing law, the increased wage disparity might be due to some other factors that result in a disadvantage for minority ethnic backgrounds without being explicitly discriminatory.

Occupations are broadly split into low-skilled, low-paid jobs and highly skilled occupations. The latter usually being higher paid. People of ethnic minority backgrounds are more likely to be in positions of the former which is especially the case for Pakistani and Bangladeshi people where 2 in 5 workers occupy 3 of the lowest-skilled occupations.

Black workers are disproportionately more likely to work in caregiving, leisure and service jobs than any other ethnicity. Despite these types of jobs paying as much as 25% lower than the average for all occupations.

However, it's not true for all ethnic minorities. The Indian ethnic minority has the highest percentage of people working in managerial and professional jobs. With over 30% in professional occupations and 10% in Director, Managerial or Senior roles.

The drivers of ethnic pay disparities

While unemployment was higher in ethnic minorities than in white workers, it was often the case that ethnic minorities were more likely to be overqualified than the white ethnic groups. Yet white employees enjoyed more opportunities for promotion.

With the exception of Chinese and Black Caribbean Immigrants, on average most ethnic minorities were younger than white workers. This is thought to be a contributor to the wage gap as pay tends to increase with age.

Data from the EHRC found that most people from ethnic minorities have higher qualifications than their white counterparts. The representation of ethnic minorities is lower than what is to be expected given the higher levels of education.

With domestic anti-discrimination laws in place in the UK, recruiters simply aren’t allowed to discriminate against candidates due to their race. However, with the pay disparities outweighing the facts with education and qualifications, it would suggest there are lingering biases at play.

Unconscious bias is when you make a quick decision in your mind without realising it. These are connected to your values and world views that are hard-wired into our minds. With such reflexive and commonplace bias, it can be more difficult than it should be to undo deep hidden prejudices and preferences from our family and social backgrounds.

When 84% of the population dominating the top positions in the workplace are from the same race, people will unintentionally gain an affinity bias. Usually appointing people in their own image. This may go far to explaining how diversity is so scarce at the CEO and board level.

So how do we go about undoing these unconscious biases?

Discrimination is a big problem in the workplace. It can lead to various problems like lack of trust, poor morale, and low productivity.

There are different ways to address racial bias in the workplace. One way is to create a culture of dialogue and inclusion. Another way is to hire more diverse employees. A third way is to build inclusive workflows and processes that will make sure that biases don't get into the organisation's systems or processes.

As our minds expand and open up to new thoughts and ideas, we are so very lucky to have the technology to support and help these thoughts to action. In this section, we talk about how technology can be used to help diversity and inclusion in the workplace.

When a candidate’s personal identifying information is hidden from resumes, recruiters are forced to select based on skill, merit and experience. There are no unconscious biases when recruiters use data masking tools.

There are incredibly useful hiring tools available that can generate behavioural-based interview questions. - While giving instructions to the recruiter on how to dig into opportunities fairly across different races. The scores for each question are counted and tallied up within the tool. This reduces subjective bias on skin colour, accent or differences and can be easily compared with other candidate scores so the most skilled person for the job gets hired.

While candidates’ appearance and voice can be heard in one-way videos they can be beneficial in reducing hiring biases.

This is because every candidate is asked the same question with the same time frame to answer. In a face-to-face interview, recruiters can ask misleading questions and introduce other talking points to help candidates out with their interviews.

A  McKinsey case study monitored the diversity in over 1,000 companies over several years. It concluded that there was a clear link between inclusion and diversity and the growth of business performance. A more diverse leadership team led to a financial outperformance.

17 of the leading companies from the study found that diversity was linked to positive effects on recruitment, customer focus and improved decision making.

If more companies can implement strategies and technologies that reduce our unconscious bias, we can expect to create an equal and fair workplace for all. This will yield positive results for the company, and also the quality of lives of ethnic minorities for a fair and just nation for all.

For more information on how diversity can improve businesses see our blog post on Diversity and inclusion in the workplace examples.