Can One Way Interviews Stop Discrimination in Interviews? 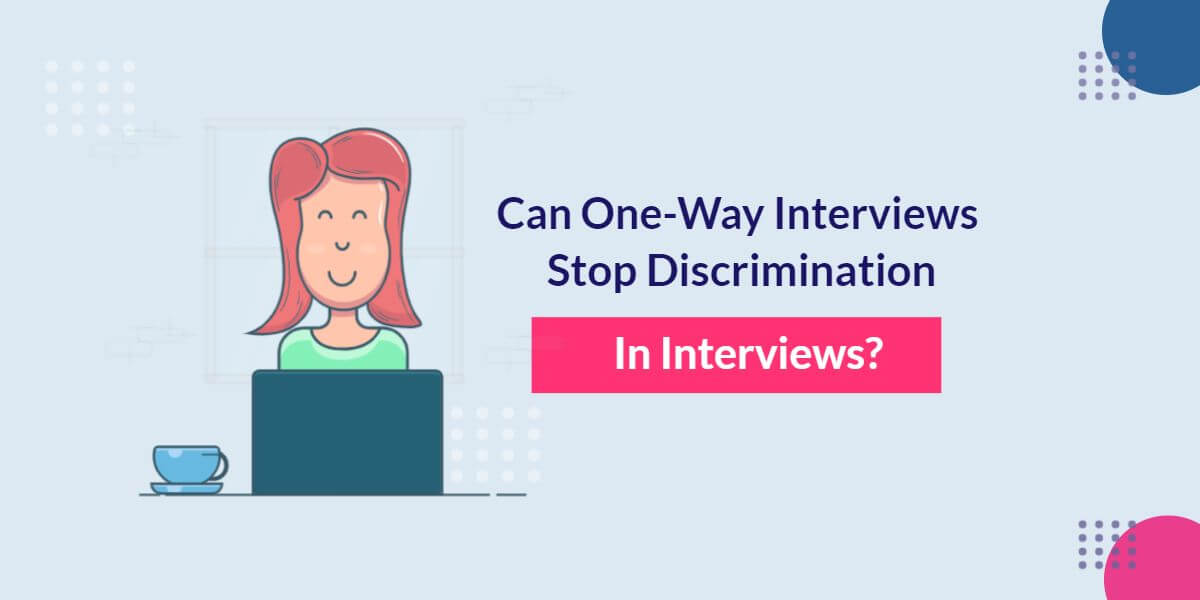 Have you experienced discrimination in interviews?

Discrimination in interviews is defined as unfair treatment of an individual based on their personal characteristics. These include race, colour, religion, national origin, gender, sexual orientation, age or other personal traits.

Over time, people have become more accepting of differences and are less likely to discriminate against others because of their race or other personal characteristics. However, there are still instances of discrimination in the workplace today.

What is discrimination in interviews?

Whether intentional or unintentional people can be discriminated against in interviews for the following reasons:

Job discrimination can also happen to people after they've been hired. Such as if you're not promoted or you may be fired for things that don't affect your ability to do your job. - Careersidekick.com

What causes discrimination in job interviews?

Discrimination is often done without the full knowledge of the discriminator. Interviewers are often not aware that their judgement is biased by gender, race or appearance, but they may consciously or unconsciously use words or phrases which could be seen as offensive.

The cause of discrimination in interviews can be traced to a number of factors.

For a basic example, an employer may have two equally qualified applicants (a male and a female). The male applicant is selected under the assumption that the female wants a family and therefore would harm her long-term career availability. To assume this is completely wrong. But it might happen because of an interviewer’s bias towards females wanting children and needing maternity cover.

Which Characteristics Are Protected?

Interviewers and employers should not ask personal interview questions. These include avoiding a person's race, colour, national origin, religious creed, sex (including pregnancy), age (40 and older), disability or genetic information.

It's in the interviewers best interest to avoid any questions about the candidate's disability. Especially questions regarding how the person became disabled, whether they need a reasonable accommodation during the interview process or if they can work with specific equipment or tools at work. (Even though some of these questions may come from a place of genuine care and concern for the well-being of the person).

Interviewers who ask if you're married, pregnant, have children, ask about your religion or race are not breaking any laws. However, if they don't hire you based on these facts then this is discrimination.

Many people have been discriminated against due to their age, race, nationality, gender as well as religion. So employers should be very careful about asking questions related to any of these characteristics to avoid being accused of discrimination.

How do you know if you're being discriminated against in the hiring process?

Discrimination on the basis of gender, race, religion or sexual orientation is not always obvious and can be difficult to identify.

While not always the case, you may believe you've been discriminated against if your interviewer gives you vague interview feedback. Often they may not identify anything you did or did not do, but instead focus on why someone else was a better fit for the role. While this type of feedback is in no way proof of discrimination, it is evidence of it being very difficult to prove you were discriminated against.

One of the most common reasons for discrimination in the hiring process is appearance. Employers are often drawn to people who are similar to them on some level. Whether it is gender, ethnicity, or something else.

Discrimination can also happen if the employer is basing their choice on stereotypes. A commonly cited example of this is how companies may discriminate against female applicants who do not conform to femme expectations.

Another way employers discriminate against applicants is by not giving them a chance to show their skills or knowledge during an interview. A company will often hire someone based on what they know about their past experience and what they see in an interview.

A clear case of being discriminated against is if the interviewer asks questions that are unrelated to the requirements or ability to perform well in the role. So what questions are considered to be discriminatory?

What interview questions are illegal?

It's important to recognise when an interviewer is asking generic conversational questions to get to know you and make you comfortable. Or whether they are digging for information that may impact you getting the role.

Some questions such as do you have a family, or children may be asked. These are typically friendly conversational topics to build rapport. However, there can be instances of the employer trying to dig out more information to check your suitability for the role.

For example, if the role requires evening or weekend overtime, having family commitments may impact your availability. Therefore, recruiters may prefer to hire a single person with more availability commitment and flexibility.

As an employer, it's so important to avoid straying into grey areas, especially when making general chit chat and getting to know the candidate. You could unintentionally ask the candidate an uncomfortable question that they won't want to answer. Then if they aren't selected for the role, they may accuse you of discriminating against them.

Its best to just avoid all questions to do with disabilities, religion, sexual orientation, age and other personal information that has nothing to do with the job qualifications.

How one-way interviews can help

One way interviews are a successful way to reduce discrimination in the hiring process.

One-way interviews are based on a standard sub-set of questions, asked to all of the candidates in the same format and same order. The questions appear on the screen and candidates record themselves answering the questions.

Recruiters need to create a question pack to go with each job vacancy. When they send out the link to the job interviews, each candidate is asked these same questions.

It would be odd for a recruiter to put in an interview question asking about each of the candidate's personal backgrounds- unrelated to the role.

Typically, questions asked regarding a candidate's personal background surface through natural back and fore conversation when face-to-face.

One-way interviews are designed so that the interviewer only collects information from the applicant.  The interviewer will then use this information to evaluate the candidate. This process effectively eliminates any biases that could have been introduced by previous interactions between candidate and interviewer and ensures a fairer interview process overall.

One way interviews cannot test the skills and problem-solving abilities of candidates in real-time. The closest way of determining candidates' skills and traits are to ask questions based on past experiences to predict how they will act in their future role.

Interestingly, testing during an interview can be considered discriminatory if the testing is unrelated to the requirements of the role.

An example of this taken from thoughtco.com highlights examples where firefighters in the City of New Haven were tested on a promotional exam. This exam specifically aimed at eliminating a disproportionate number of people from minority groups as they overwhelmingly did poorly on the test.

One way interviews don't stop the recruiter with an unfair bias towards or against candidates based on their appearance, as the interview is video recorded. Even if no questions are asked on the individual's personal character, a recruiter may develop their own personal bias solely based on the candidate's appearance or accent.

How do you interview without discrimination?

As an employer, it's a grey area ensuring a candidate doesn't feel discriminated against in an interview. - Especially when you have no intention of discriminating against someone for any of their personal characteristics.

There are some ways to ensure candidates feel more comfortable and don't suspect you of discrimination if they are unsuccessful with the role:

1. Use a diverse panel of interviewers

Implement a diverse interview panel that is made up of people from different backgrounds.

One-way interviews reduce discrimination by being thoughtful about the questions asked and the language used. You can also be mindful of your biases and how they may affect the judgment of the candidate.

3. Use a scoring matrix

A scoring matrix reduces unintentional discrimination as it keeps the questions focused on the candidates' ability to perform the role. - Not focused on their personal characteristics.

What is a fair recruitment process?

The recruitment process is a lengthy and complicated procedure for employers. It takes a lot of time and resources from the company. Employers should not discriminate during interviews. They need to be fair to all candidates, regardless of their background, qualifications or experience.

To hire great talent, recruiters need a fair recruitment process, evaluating people based on skills, experience and qualifications. This way, the best person for the role is hired.- Regardless of race, gender, age, religion and more.

One comment on “Can One Way Interviews Stop Discrimination in Interviews?”